Well Suited, the final standalone in the Red Lipstick Coalition Series from Staci Hart, is coming May 2nd and we have the beautiful cover for you! 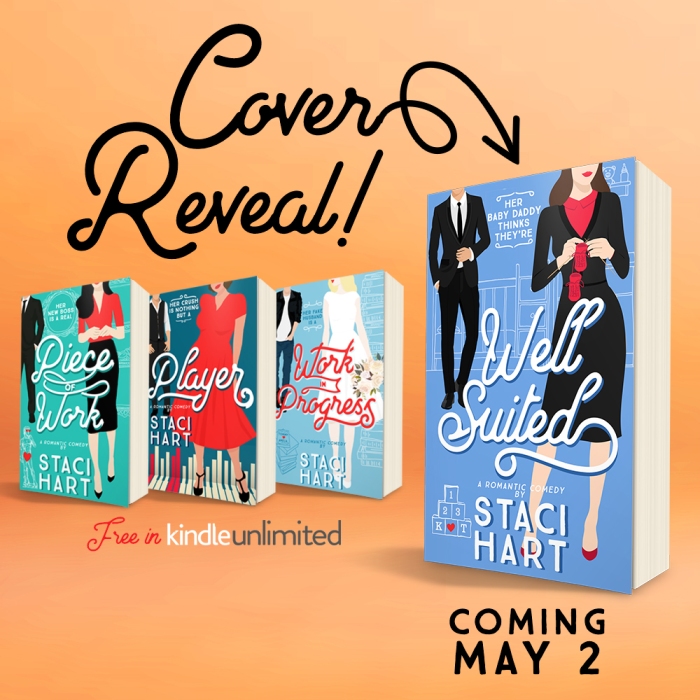 Chemistry is my love language.

I’ve always been able to separate feelings from chemosignals. A shot of dopamine, a dash of serotonin, and a sprinkle of oxytocin—and bam. You’re in love.

I couldn’t even be surprised as I stared down at the little blue plus sign, because I knew exactly when and how, and with whom it happened.

When: approximately five weeks ago.

Who: one night stand.

The upside? I don’t have to go looking for a suitable mate.

Genetically, he’s the cream of the crop. His musculature is a study in symmetry and strength, his height imposing and dominant. He is a man who thrives on control and command, a man who survives on intelligence and resourcefulness. A perfect male specimen.

And the whole package is wrapped up in a flawlessly tailored suit.

I’m having this baby, and he insists we’re well-suited to have it together. And what’s worse? He wants more, in the way of love and marriage.

But love isn’t real. It’s just a product of chemistry.

And if he changes my mind about that, we’re both in trouble.

Staci has been a lot of things up to this point in her life — a graphic designer, an entrepreneur, a seamstress, a clothing and handbag designer, a waitress. Can’t forget that. She’s also been a mom, with three little girls who are sure to grow up to break a number of hearts. She’s been a wife, though she’s certainly not the cleanest or the best cook. She’s also super, duper fun at a party, especially if she’s been drinking whiskey.

From roots in Houston to a seven-year stint in Southern California, Staci and her family ended up settling somewhere in between and equally north, in Denver. They are new enough that snow is still magical. When she’s not writing, she’s reading, sleeping, gaming, or designing graphics.

Lady Heather's Reviews I'm an avid reader. My Favorite Books: Right now I'm reading contemporary, urban fantasy, paranormal, and historical romance. I LOVE reading stories with sassy-smart-strong-funny-colourful women, with strong-protective-smart-disciplined, alpha men. About Me: I'm a hopeless romantic. I read ALL romance. The stories I read MUST have a Happily Ever After. I often re-read my favorite books. I don't like reading horror, stories that have infidelity, love triangles, books that are unnecessarily violent, and I ABSOLUTELY despise books that end abruptly *ghah* Words I try to live by: "Treat people the way you'd like to be treated"
Published March 25, 2019March 25, 2019